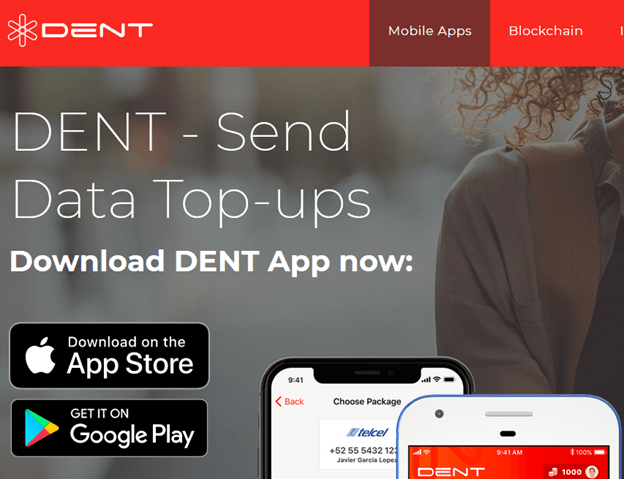 Dent App is the latest digital company offering users free unlimited data for using the service. Dent App makes use of Dent Token, a universal currency that allows Dent users to buy, sell and donate their mobile internet, no matter the user’s country or network provider.

According to its official website DENT claims it aims to solve expand mobile data access and allow Dent users use mobile data for as long as they wish by removing restriction and limited validities that comes with most data plans.

To get free data on the Dent app, you would require DENTs (Dent credits) which are given to users when they sign up on the app. You can also get more dents by referring your family and friends. The more you refer the more dents you get and the more data you can buy. This service works for all networks including Nigerian networks like MTN, GLO, Airtel and 9mobile and other data networks like AT&T and Verizon in the USA.

For those in USA and Nigeria, you would want to first check the list of operators that are connected to the Dent App to ensure your network provider is on the list or you wouldn’t be able to purchase mobile data packages with your Dent credits

Download the Dent app from their official website or from your device OS respective app stores.
Android | iOS

Immediately the Dent app is installed, launch the app and click “Register”

You will be required to input other details which should be easy if you follow the instructions carefully.

After entering your details and cross-checking to ensure they are correct, complete the registration. You will receive 30 Dent credits which can be used to purchase a mobile internet data package from any network provider worldwide through the Dent app.

How to Earn Dents Coins On The Dent App

While you will be given 1200 Dent credits when you register that wouldn’t be enough to get any significant data. You would require more than 4800 to get up 1.5GB Free Unlimited Data to browse and download on the internet.

This has made getting more dent credits a necessity and it is quite easy to do so.

To earn dents you would have to invite your friends to download and register on the Dent app, however, they must do this through your referral link or you wouldn’t get the free dents.

After registering you will be given a referral link, simply click on the “INVITE NOW” button on the homepage to get your referral link which you can post anywhere and get more dents.

How To Convert Dents Coins To Instant Data

Converting Dents to mobile data packages is very easy. On the homepage of the app, you will find a button that states “SEND DATA TO”, input your number in the space provided below the button with your country code e.g if your country code is +234 and your mobile number is 07010020030, then write +234 7010020030.

Click on the button and you will receive the data equivalent of your Dent credits.

Note: You can only buy data from network providers that are on the Dent Mobile Operator list, ensure to check and confirm your network provider is on the list before going ahead with any operation.

Ways of Buying Dent Credits From The App

If you run out of Dent credits and have no way of getting Dent credits by referring your friends through your referral link to download and register on the Dent app then you can simply buy more Dent credit for data purchases.

Click “Buy DENTs” and select the data package you wish to purchase.

You will be directed to pay through Paypal.

Note That: Right now Paypal is the only valid means of payment available of the Dent app. You must have a valid Paypal email address before you can be able to make purchases within the Dent app.

How To Transfer Dent Credits From Outside Wallets

The Dent app also offers an option to those who choose to transfer Dents from their wallet.

A QR code will pop up and the wallet address to send Dent credits to.

Dent is one of the best apps available that offers you free unlimited data without doing anything for it. While there might be other services like Opera which offer free airtime bonuses, Dent allows you to browse the internet to your heart content which makes it a great app.

One of the main advantages of Dent App is that you can earn as many Dent credits as you wish as long as you continue to refer more of your friends to download and register on the app through your referral link. This means free unlimited data opportunities for you.

Dent App is the latest digital company offering users free unlimited data for using the service. Dent App makes use of Dent Token, a universal currency that allows Dent users to buy, sell and donate their mobile internet, no matter the user’s country or network provider.