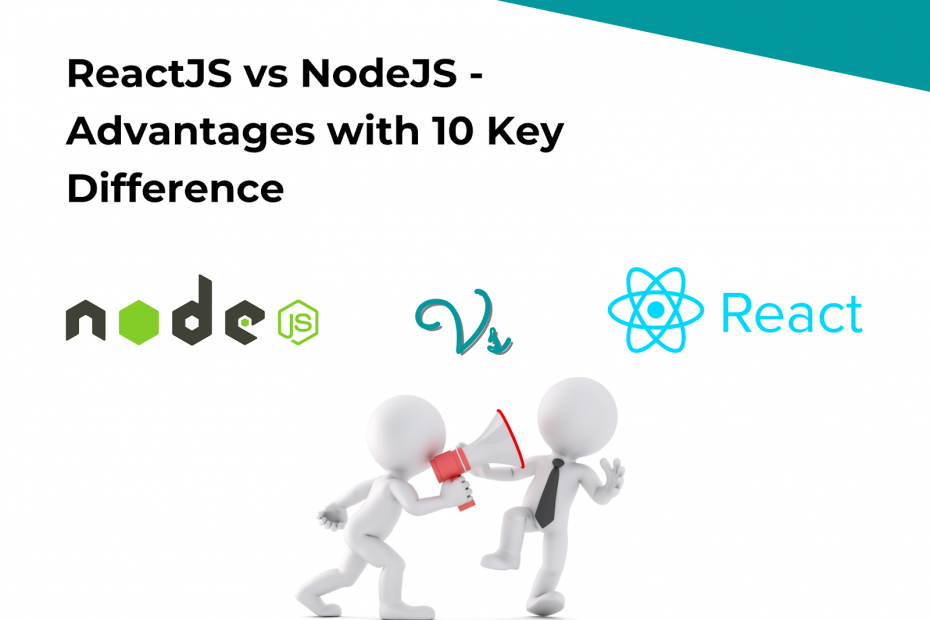 JavaScript has truly become an undeniable leader among the most popular programming languages. NodeJS and ReactJS are popular JavaScript frameworks that often confuse the developers from choosing the best.

Every framework has its pros and cons. After crossing 1,024,716,169 downloads, NodeJS has become the gem of the web developing industry while React is downloaded 7,900,757 times a day/week.

But, what is so beneficial about these frameworks? Today, in spite of having tremendous advantages, the battle of NodeJs vs ReactJS has hot listed the industry.

Here, we are going to discuss the 10 key differences and effective advantages of ReactJS and NodeJS to make it easy for you to select the best for your server.

NodeJS is an open-source server-side development used to handle the back-end of the web browser.

NodeJS is a lightweight framework which is developed by Google. It is built on Chrome’s V8 JavaScript engine.

NodeJS is designed as a push-based with real-time architecture recommended for traditional websites and back-end API services.

Other than web applications, Node.js development companies use it to develop various applications such as real-time chat apps, REST API servers, or command-line applications.

After getting an overview of NodeJS, let us find out its benefits.

NodeJS is popular as a full-stack technology. It provides tremendous facility in one framework. Other than code sharing and speedy performance, NodeJS also provides you with several free tools to improve the efficiency and productivity of web application development.

Here, you can also reuse code on the frontend and the backend of the server by wrapping the programming language on both sides of modules and can create new levels of abstraction.

Originally, NodeJS was developed for the Chrome browser. Here, the Chrome V8 JavaScript engine compiles the functions and creates an impressive speed.

Currently, Google is investing heavily in the NodeJS engine every year to improve its demonstrative performance.

The asynchronous feature makes NodeJs easily handle the request without any delays. Its non-blocking nature pushes out a callback immediately after proceeding with the request and continues to serve them.

This helps the NodeJS to smoothen the single-thread process.

Furthermore, this single-threaded nature has made NodeJS the reliable choice for online games, chats, video conferences, or any solution that requires frequently updated data.

NodeJS is a lightweight framework that only includes minimum modules. This makes it the preferable choice for microservices architecture.

So instead of creating a large core of modules, break them into small microservices. As a result, you can easily integrate additional features with better flexibility and updated functionalities.

ReactJS is a JavaScript-based UI development library that makes the entire development process smoother and easier.

It is featured among the most commonly used front-end libraries. React offers several extensions like Flux and React Native as an application architectural support.

ReactJS allows you to develop effective user interfaces for websites and applications in a well-organized way.

With ReactJS, it is quite easy to create dynamic web applications with less coding and more functionality.

It helps to compare the state of components and update only a particular reasonable object in the real DOM. This creates web applications faster.

Reusability is a boon for developers. React allows you to reuse the components throughout the application which saves time and effort and improves productivity.

React also offers you tools and frameworks that you may reuse to build new applications.

This framework allows the developers to reuse elements made for various apps with the same functionality. As a result, it reduces the efforts of development and ensures accurate performance.

With the help of Chrome extension, React application enables the debugging process and removes the bugs like user-interface bugs, logic bugs, operative bugs, and so on.

This helps to speed up the web application and makes the process easy.

React uses a strong combination of JavaScript and HTML to automate the entire process of code writing and execution simple for the intended project.

Its default library consists of numerous functions. It converts HTML segments to the required format and makes them easy to understand.

This transforms the entire project without facing any problematic errors.

ReactJS compiles JavaScript and HTML tags and makes it easy to deal with a huge set of data that contains the DOM (Document Object Model).

At this particular stage, ReactJS assists to determine which component requires updates to get perfect results.

This defines how React involves in every situation and deals with the complexity simply and easily.

Now, let us find out what differentiates NodeJS and ReactJS by comparing the two.

10 Key differences between NodeJS Vs ReactJS:

Which is Better NodeJS or ReactJS!!!

After digging into the overall concept of NodeJS Vs ReactJS, one thing is crystal clear: if one is a library to deal with the frontend, the other is a core library.

React provides interactivity to the layout of any UI that helps the application development to perform fast and quality work. As a result, the process saves time for both- clients and developers.

On the other hand, NodeJS provides a scalable API that is capable of handling an enormous amount of requests within the server with high production.

Thus, both are equally important for the project to accomplish fast and scalable productivity.

But, React doesn’t require NodeJS to run the project as it gives you language to describe UI but, NodeJS may require React to fulfil the task. So you can use both frameworks with NodeJS.